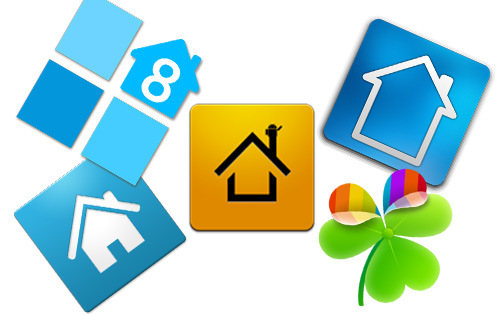 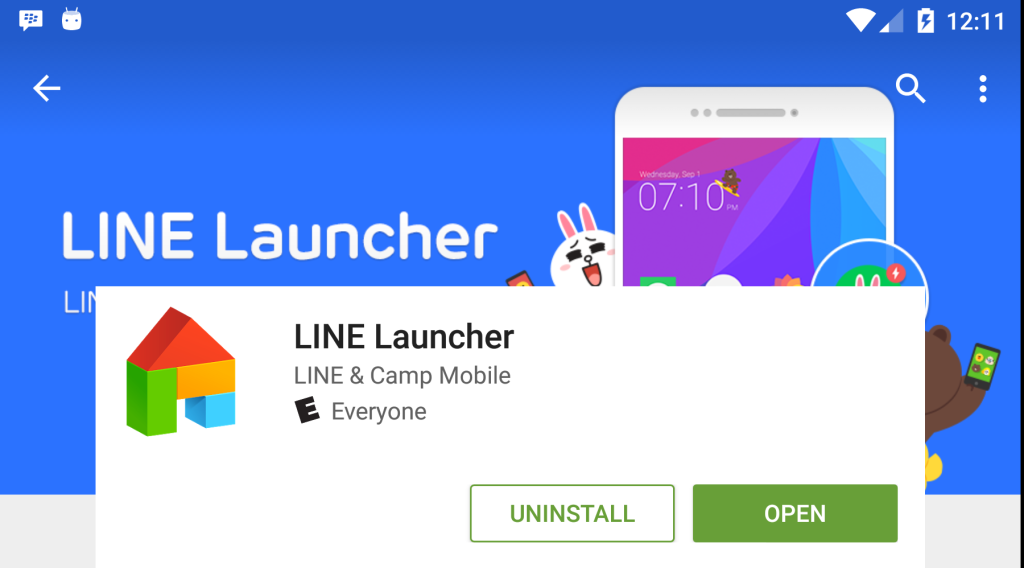 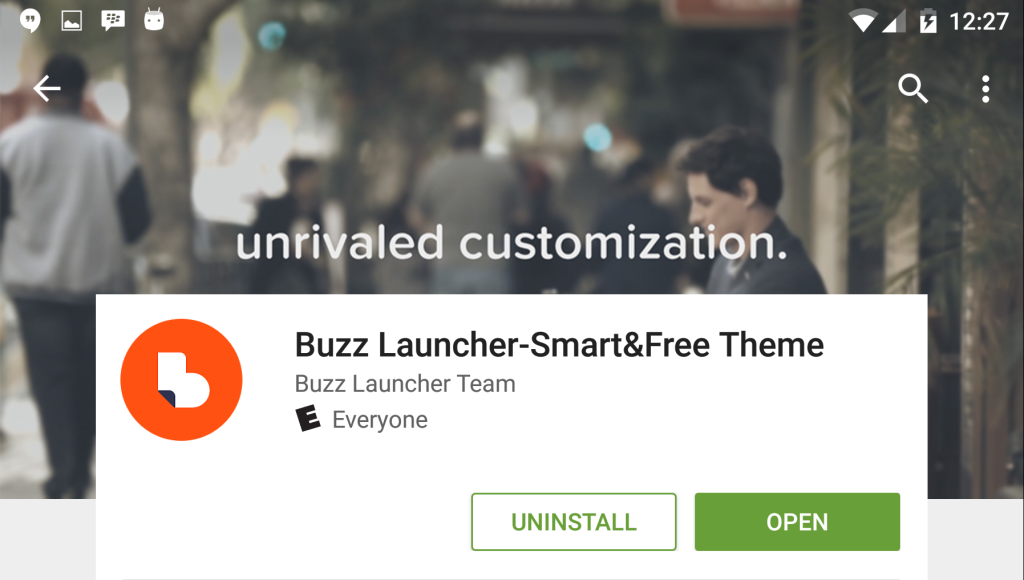 These launchers are built for fun.  They don’t have the clean and nearly invisible feel of Nova or the detailed care of Action Launcher 3 but they are still full blown launchers with a vide variety of customization tools and tricks.  I would say that all 4 launchers are in the same league but definitely not at the same level.  Buzz and LINE come with bloatware tied to the launcher and the launcher itself, general bogs down the system.  Thanks to RootJunky I recently installed Marshmallow and the launchers do seem to run a bit smoother than they did on Lollipop but they still slow me down, just a touch. Anyway if you are looking for performance look back to the first two launcher we looked at.  If you looking for fun…. well then, here we go. 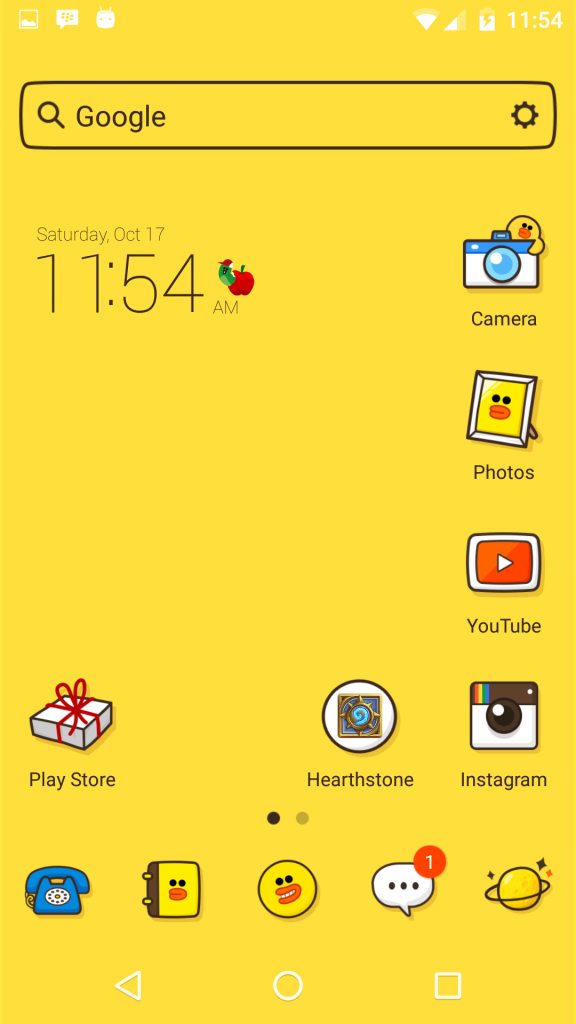 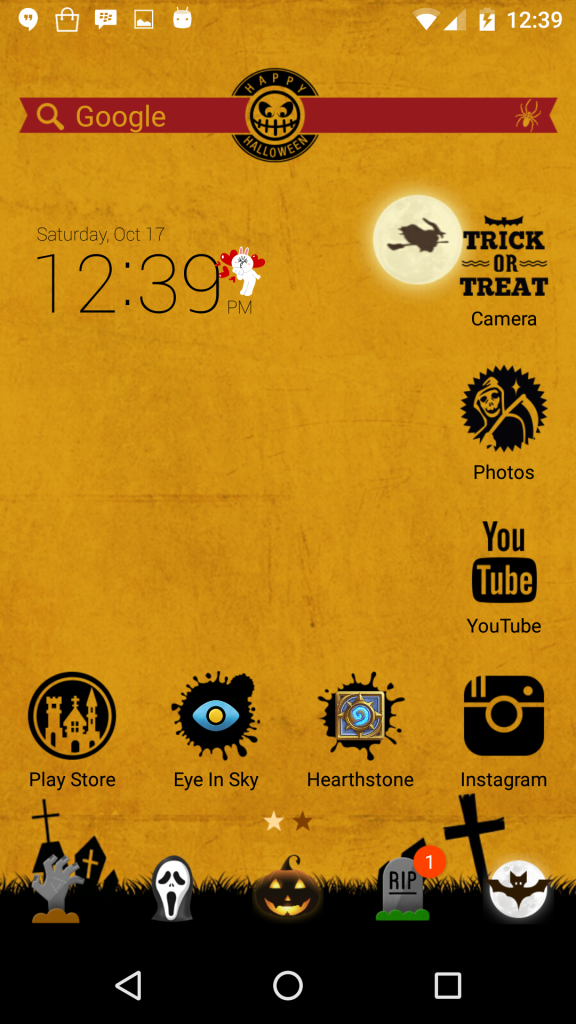 Let’s start with LINE Launcher. This has to be the most adorable launcher on the planet. I can’t help but fall in love with the simple fun you can have with all of these free themes.   There 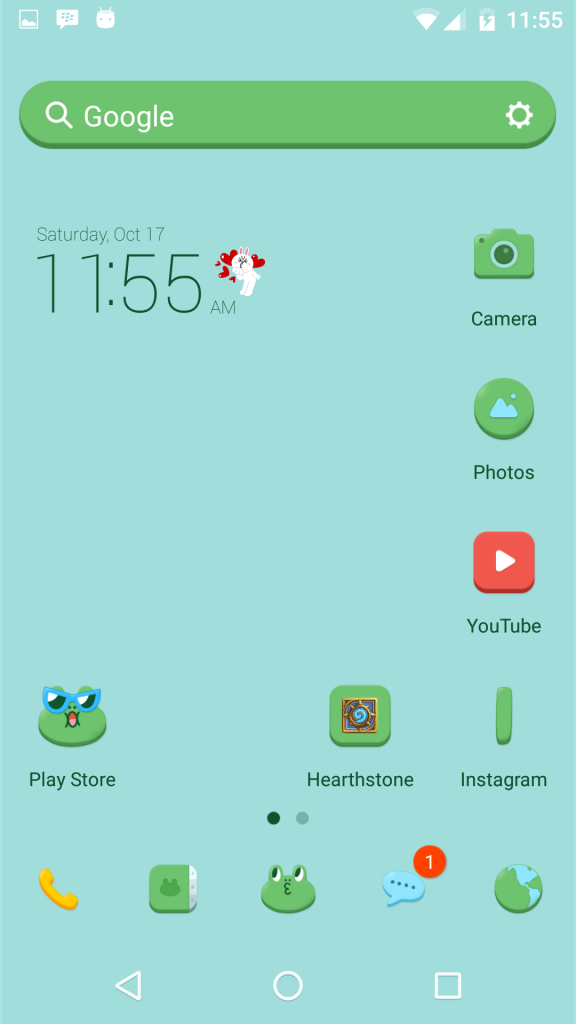 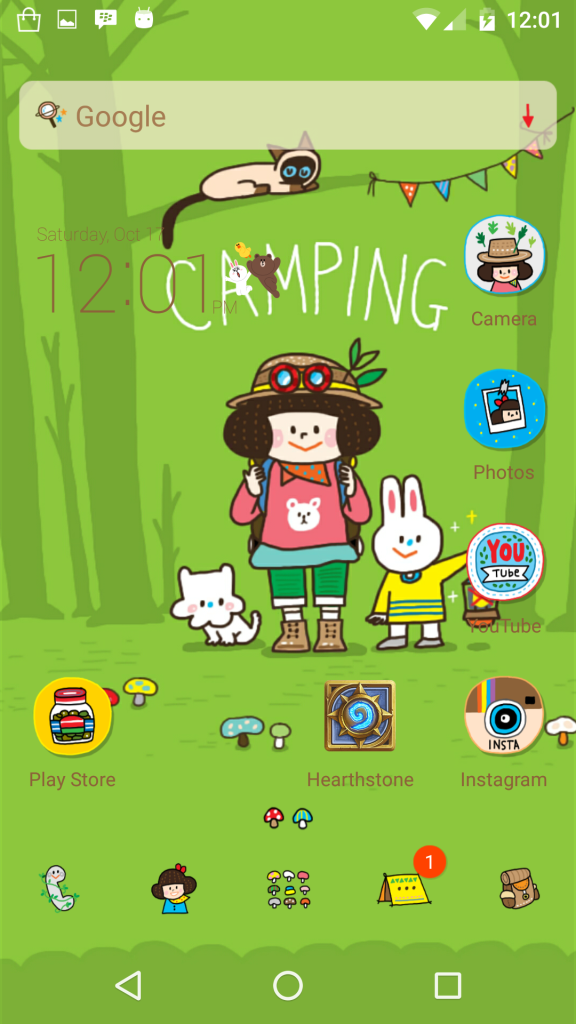 is a great sense of anonymity on the internet and you dear reader, have no clue of who I am.  I could be the stereotype of a 15 year Korean girl that just loves all things cute and cuddly.  Thing is, i am not and I still like LINE launcher.  I am secure enough to tell you that all 220 pounds of my middle aged, manly fury loves these themes.  They are just such great fun.  With a quick jump to their theme shop you can browse by what is new, by season or colour.  It is so easy to find a theme that fits your mood or activity for the day.  I will be honest with you and say that do not keep these themes or this launcher on my phone all the time.  I will not be using these themes if I am have a beer with a friend and swapping some manly stories.  It just does not fit. However if i am going hiking with my daughters, now that’s different.  Halloween is coming and why not enjoy the time with a safe for work and safe all ages theme?  LINE launcher is definitely a lot of fun.  Check it out and I am sure that you will find something to like.  They do have a variety of themes and something to fit all tastes but they excel at cuteness.  If you have an old phone that you are handing down to your daughter, put this launcher on it and she will be the coolest kid in grade 3.

Not sure why a kid in grade three needs a phone but we’ll save that for another post. 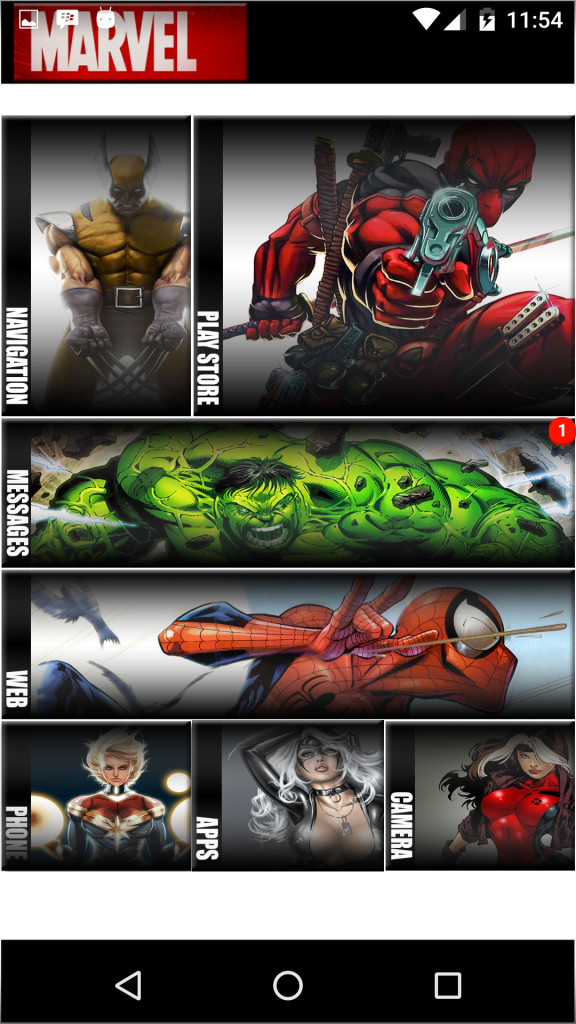 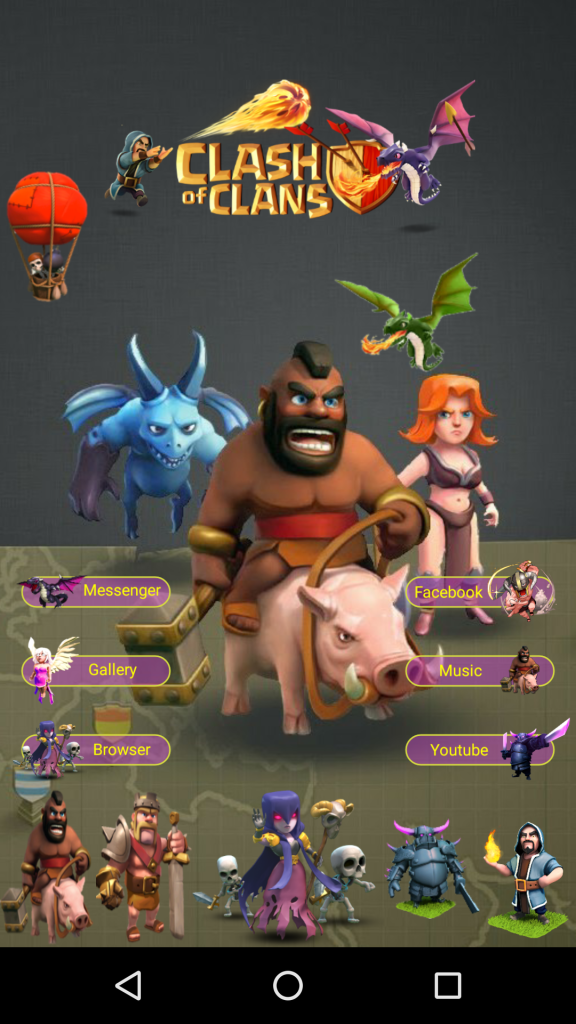 If all that cuteness was to much for you, focus on Buzz Launcher.  I see this launcher as the one created for and by Fanboys and even some Fangirls.  Buzz like all launchers allows you to customize your phone’s layout.  It is a powerful tool but not really different than any other launcher in capabilities. Where buzz really shines through it 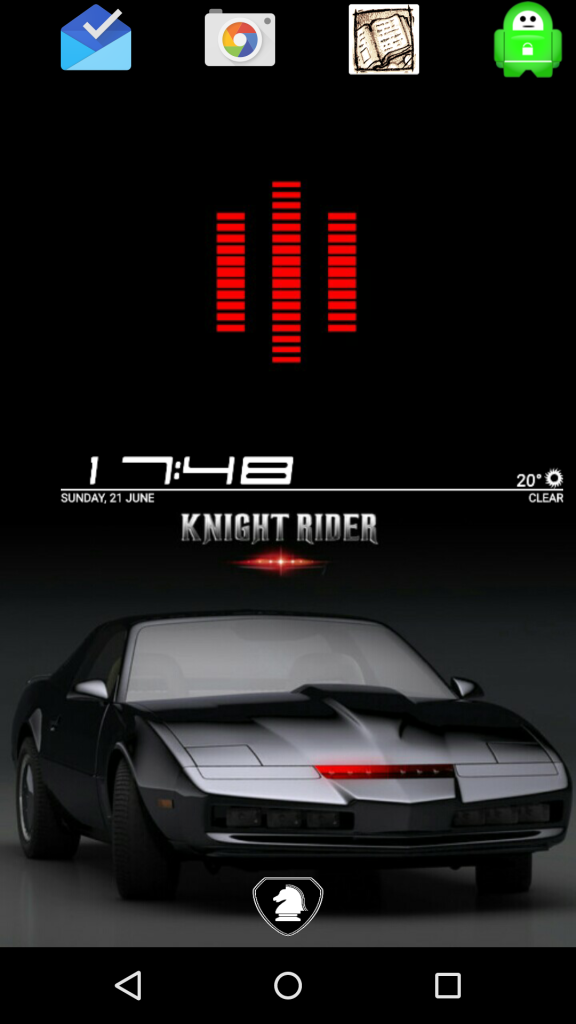 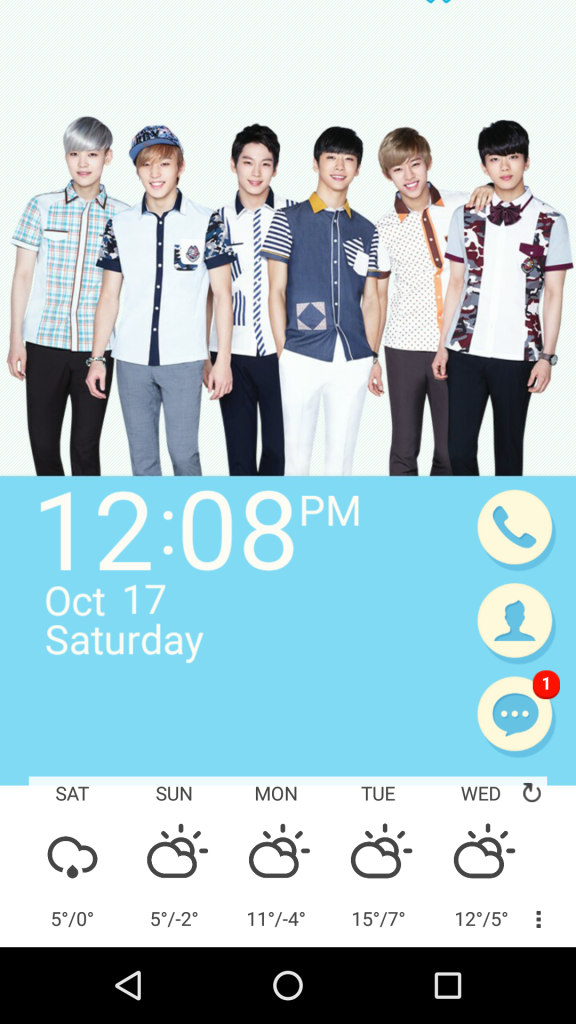 community involvement, and it is a community of Fanboys.  If you are into comics you will say “excelsior”  with every theme dedicated to Stan Lee’s Children.  Into Gaming?  Buzz has a theme for you.  Check out the Clash of Clans theme.  Tap the hog rider to open your phone and the Witch opens your app draw.  Prefer a different set up? It is fully customizable.

As a Kid, i thought Knight Rider was the coolest thing ever.  And now my phone plays the show’s intro for a ringtone.  Hangouts opens when I press KITT’s voice box.  For that alone, I love this launcher.

But what if you are a 15 year old Korean girls that does not like comic, games or american TV shows from the 80’s.  That’s OK because Buzz Launcher has themes with the latest Korean Pop band.  Seriously, It has a lot of Korean Pop bands…… but 50 million Koreans can’t be wrong, so don’t judge!

It does not matter what you are a fan of, form Premier League Soccer to boy bands around the world you can find it on Buzz.  The app has a great setup for viewing and sharing your themes. You view themes created by fans of nearly everything, download it and make your own modifications, just to give it that personal touch.  If you have a super fan living inside of you, give this launcher a try. You will be impressed.

Buzz and LINE, two great launcher for your Android device.  If you are looking to add some fun into your daily driver these are great places to start.  What is your launcher of choice?  Is all this cuteness and fanboyism to much for you?  Do you prefer the more refined approach of Nova or Action Launcher 3?  Does your heart flutter at the cute characters on LINE launcher? Will Yoda or your favorite team stare back at you from your phone’s launcher?

Let me know were you stand, comments are welcome.

Next week we will wrap up this discussion with an overview of launcher and their worth.